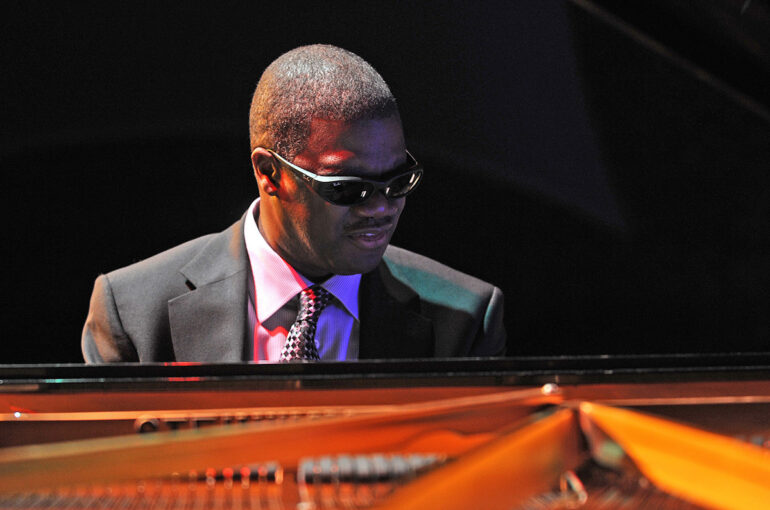 New York, NY, October 28, 2020 — Marcus Roberts and The Modern Jazz Generation will join the American Symphony Orchestra (ASO) to offer United We Play, a short film to be available on ASO’s new streaming platform ASO Online, starting at 5 PM EST on Wednesday,December 9. The production features three world premieres of works for strings, jazz instrumentals, and piano composed by Marcus Roberts and commissioned by the ASO: America Has the Blues, Seeking Peace, and United We Play. The film also includes commentary by the composer and the ASO’s music director Leon Botstein.

United We Play is inspired by the current turbulent times, and the belief that strength comes through adversity—where there is divide, there is also community. The project combines the talents of Marcus Roberts, The Modern Jazz Generation ensemble, and the ASO’s string section in a musical, visual, and narrative digital experience that speaks to the future in a positive and hopeful way.

An all-Ellington symphonic performance scheduled for March 12, 2020 and featuring Roberts and members of The Modern Jazz Generation at Carnegie Hall was cancelled hours before the performance due to the pandemic shutdown in New York. The ASO will reschedule this concert in the 2021-22 season pending safety and public health requirements.

Marcus Roberts is a celebrated jazz pianist, recording artist, award-winning composer, and Florida State University faculty member. He was profiled on CBS News’ 60 Minutes, which traced his distinctive journey from his early roots in Jacksonville and at the Florida School for the Deaf and Blind to his remarkable career. Roberts is also a recipient of the Helen Keller Award for Personal Achievement from the American Foundation for the Blind.

For the past 25 years, Roberts has been blending the seemingly different worlds of jazz and classical music through his many compositions, arrangements, and performances. The result combines the contrasting approaches of spontaneous improvisation and written music into a collage that is uniquely and unmistakably American. Roberts’ Grammy-nominated recording Portraits in Blue (Sony Classical, 1996) was one of the first recorded collaborations between jazz and classical music. Since then he has been commissioned by numerous organizations such as Chamber Music America, Jazz at Lincoln Center, ASCAP, the Atlanta Symphony Orchestra, the Savannah Music Festival, and Seiji Ozawa and the Saito Kinen Festival Orchestra. Roberts’ renowned jazz trio has been touring for more than 25 years and served as the foundation for the multi-generational The Modern Jazz Generation ensemble.

“We are a diverse group of people and we love playing together,” says Roberts of United We Play. “As musicians, we have learned to depend on and trust one another in order to create something greater than any one of us could create alone. I believe that every time we listen to someone else’s voice we become stronger and better people. Given the current state of the world, I hope that the great musical collaboration we built with the ASO for United We Play will be used as a vehicle to encourage and demonstrate that strength.”

“The American Symphony Orchestra has a longstanding history of presenting works by Black American composers,” said Music Director Leon Botstein. “To continue its mission, the ASO recently expanded its outreach by featuring works and composers unfairly neglected on our new streaming initiative ASOOnline. It is my sincerest wish that United We Play, our second collaboration with Marcus Roberts, clearly shows how the performing arts can lead the way in presenting a vision of a more democratic and equitable society.”

The ASO’s string chamber orchestra will be filmed at the Fisher Center at Bard College while Marcus Roberts and members of the Modern Jazz Generation will record separately from their home locations. The film is produced and presented by the ASO in collaboration with Marcus Roberts.

Funding for this project is being raised through the Musician Support Initiative, a campaign to provide opportunities for ASO’s musicians while live performances with full orchestra are not possible. Support for the production of United We Play can be made through online donations.