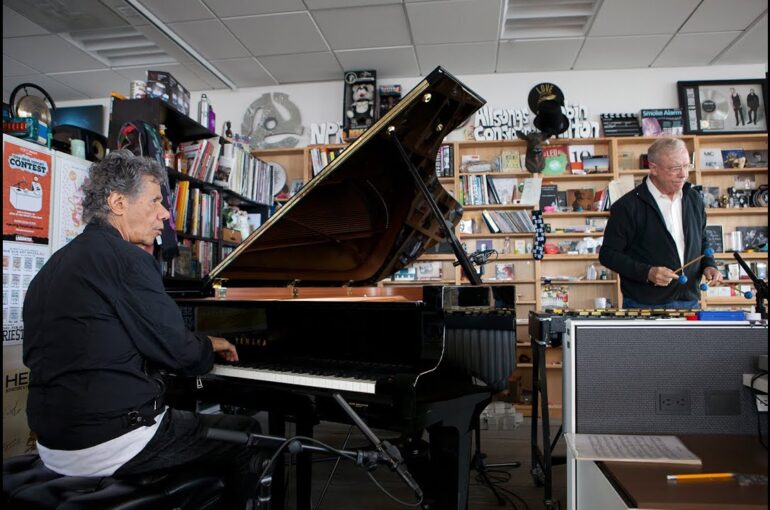 June 13, 2016 by SURAYA MOHAMED • Sometimes big-name artists need special attention. But in this case, it wasn’t because they’ve been jazz pioneers and innovators since the 1960s and are considered to be founding fathers of jazz fusion, not to mention two of the most important jazz figures performing today. It’s not because they’ve collectively recorded more than 100 albums and won 29 Grammy Awards. The agitation was because both of their instruments couldn’t fit behind Bob Boilen’s Tiny Desk.

There were logistical hurdles to overcome before the jazz giants’ arrival. We had to move the desk to make a bigger “stage.” Piano movers hauled the 900-pound Yamaha C7 grand piano from our first-floor performance studio up the freight elevator to the fourth-floor Tiny Desk area. But weeks of meticulous measuring and planning paid off when the rented vibes were delivered and just fit alongside the piano.

Gary Burton and Chick Corea were in town for the 2016 NEA Jazz Masters Concert. The NEA Jazz Masters fellowship is the highest honor our nation bestows on jazz artists. Each year, the program honors a select few living legends who have made exceptional contributions to the advancement of jazz. Burton was a newly appointed 2016 recipient, while Corea received the honor in 2006.

These friends first played together 44 years ago, when they recorded their very first album, Crystal Silence. In his autobiography, Gary Burton tells the story:

We set aside three days for the recording. Except for … one tune in Munich, Chick and I hadn’t worked together before Berlin, so we figured we would need a fair amount of time to choose songs and finalize arrangements. But to our amazement, it all went incredibly fast. We would spend maybe twenty minutes creating an arrangement, and then record. We did every song in just one take, except that we required a second spin through “Senor Mouse.” The record was finished in just a few hours, and the two realized they had a unique musical chemistry with the ability to anticipate each other’s improvisational ideas. That album went on to become a classic: flawless yet fresh and forever new.

A few thousand concerts later, the jazz masters showed up at NPR HQ to perform a concert at our newly expanded Tiny Desk. On this day, it had been almost two years since Chick Corea and Gary Burton had played together — the longest break they’d ever had. But once again, their remarkable ability to connect was demonstrated in two songs they play together all the time.