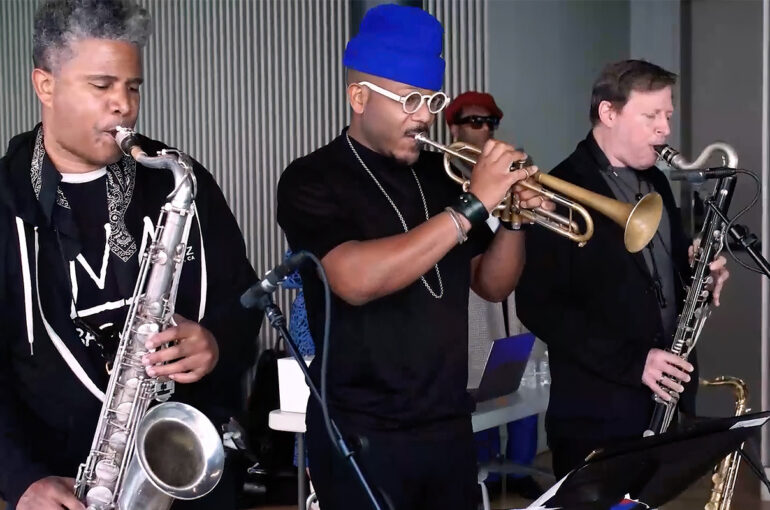 The SFJAZZ Collective is a talented cohort of artists who perform arrangements of works by modern composers and also newly commissioned pieces by each member of the band.

In 2020, the Collective was scheduled to perform an in-person Tiny Desk concert, but it was canceled due to the pandemic. This Tiny Desk (home) concert was recorded in The Joe Henderson Lab at SFJAZZ, a large, sunny venue that serves as both a live performance space and as the Collective’s rehearsal space.

Earlier this year, the ensemble released New Works Reflecting the Moment (Live from the SFJAZZ Center 2021), an album addressing racial injustices, the ongoing pandemic and political polarization. In this concert, the musicians perform three songs from that project. “Ay Bendito” was written by tenor saxophonist David Sánchez, and its title is slang for “oh my God” or “aw man”; it’s also subtitled “The Struggle Continues.”

Written to reflect the present moment, especially the isolation and social upheaval many of us continue to endure, “Mutuality” by tenor saxophonist Chris Potter was inspired by a Dr. Martin Luther King Jr. quote that reads, “Injustice anywhere is a threat to justice everywhere. We are caught in an inescapable network of mutuality, tied in a single garment of destiny. Whatever affects one directly affects all indirectly.”

Vocalist Gretchen Parlato‘s “All There Inside ” was written with fellow SFJAZZ Collective vocalist Martin Luther McCoy in mind. Their voices fit together beautifully, and both the warm harmonies and the charming melody are the perfect foundation for Parlato’s inspiring message of hope and positive change: “Because it’s all there inside, all there inside of you.”