Yoko Miwa
trio performance of Monk's Think of One 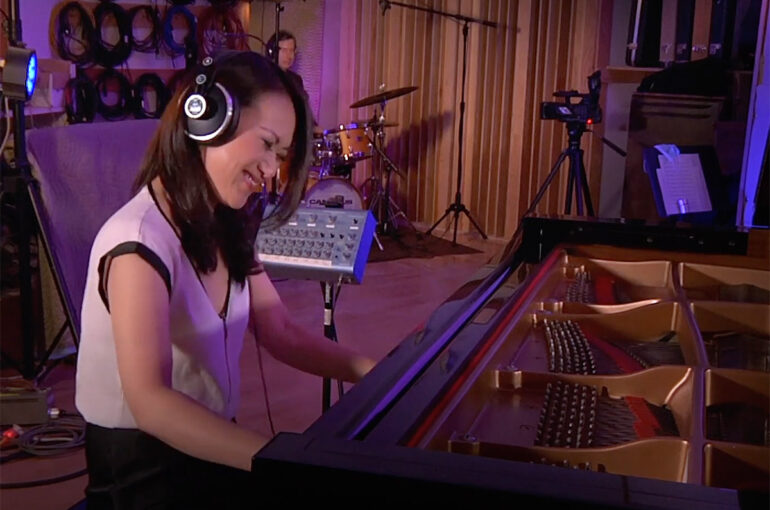 2020 was a trying year for all of us, and pianist Yoko Miwa suffered more than her fair share of challenges. Like most musicians during this unprecedented pandemic, she suddenly found herself without the opportunity to perform. The recording of her new album was postponed and her trio’s longtime home base, Les Zygomates Wine Bar & Bistro in Boston, closed its doors for good. Worst of all, her father passed away after a battle with Alzheimer’s Disease.

Miwa would certainly have been forgiven if her delayed return to the studio had resulted in an uncharacteristically somber set of music. Instead she emerged with Songs of Joy, a welcome dose of optimism and uplift that shines like a ray of hope through the dark clouds overhead. Songs of Joy features Miwa’s longstanding trio with bassist Will Slater and drummer Scott Goulding, along with guest bassist Brad Barrett, another regular collaborator. The album combines songs that have provided solace and inspiration to Miwa with five original pieces composed as a means of escape from the lockdown routine.

The songs that emerged from this less-than-ideal incubator reflect Miwa’s persevering spirit, her jazz-inspired spontaneity and her classically-trained virtuosity – all characteristics that have been recognized by no less an authority than legendary pianist Ahmad Jamal, one of Miwa’s idols. “At 90 years plus, I have known and heard most of the great pianists, [including] Art Tatum, Oscar Dennard, Phineas Newborn, Nat Cole, Dodo Marmarosa, Johnny Costa, Erroll Garner, and on and on,” Jamal says. “Not to mention the pianists performing the European Classical works that I have followed as well. In Pittsburgh where I was born, and where some of the aforementioned are also from, we had to study both American Classical Music as well as the European Classical forms. Yoko Miwa is the result of both worlds. She is amazing and will continue to grow.” McCoy Tyner is one of several formative influences to whom Miwa pays tribute through her original pieces on Songs of Joy. The boisterous swing of Bobby Timmons and Benny Green, two of the pianists whose brilliant sound was forged in the crucible of Art Blakey’s Jazz Messengers, anchors the finger-snapping groove of “Small Talk.” The bright, dancing “The Rainbirds” was inspired by the compositional style of Kenny Barron. And the lush, elegant “Inside a Dream” bears the unmistakable imprint of perhaps Miwa’s most important idol, Bill Evans.

Miwa’s compositions couldn’t help but be affected by the times in which they were written. The steely “Largo Desolato” feels haunted yet determined, evoking the unnaturally empty streets of New York City at the height of the pandemic. The gorgeous ballad “The Lonely Hours” is dedicated to Miwa’s father, who spent many of his final days alone due to quarantine conditions. The rollicking “Tony’s Blues” was penned for Miwa by Tony Germain, former assistant chair of the piano department at Berklee College of Music, where Miwa is an associate professor. The work of Thelonious Monk is a constant in Miwa’s repertoire, and here she performs a muscular take on one of her favorites, “Think of One.” Sheila Jordan also provided an entrée to the blistering “No Problem,” a piece by the singer’s ex-husband, pianist Duke Jordan, that has become a staple of the trio’s sets. The album ends with a reflective take on the folk classic “Babe I’m Gonna Leave You,” by way of the famous Led Zeppelin version and graced by Brad Barrett’s entrancing arco playing.